We are human beings. Not symptoms of over population for you to deal with.

Aren’t we all a fan of conspiracies? Don’t we all love the mystery? The way that all the little dots seem to add up to a master plan that is out of our control? I guess for many, myself included, there is something thrilling about believing in conspiracies. Albeit some are outright ridiculous, with little substance and/or logic. Yet the idea of conspiracies theories makes life a little less dull. Adding some fantasy to The Groundhog Day that is our lives.

The Conspiracy, released in 2012 is a found footage thriller made in Canada. Similar to most found footage films, this movie immerses the reader into a central viewpoint of the story. However, unlike The Blair Witch Project and Paranormal Activity, The Conspiracy takes on a sense of realism and begins to become similar to a documentary. Which coincidentally, after some research is what, writer and Director, Christopher MacBride describes as a ‘faux documentary.’

The inspiration for this script came from a friend of the director who introduced Christopher to conspiracy theories.

“For several months I got lost down that rabbit hole and eventually a light bulb just went off and I realized there was a really compelling story to tell set in that world.”

The Conspiracy 2012, follows the story of two documentary filmmakers who set out to create a film about a conspiracy theorist named “Terrance G” however, during the course of filming, Terrence disappears. The two filmmakers throw themselves into the life of Terrence, piecing together his pin board of theories and evidence. Naturally, both filmmakers find themselves lost in the world of a global syndicate whose aims and machinations are clouded in secrecy. 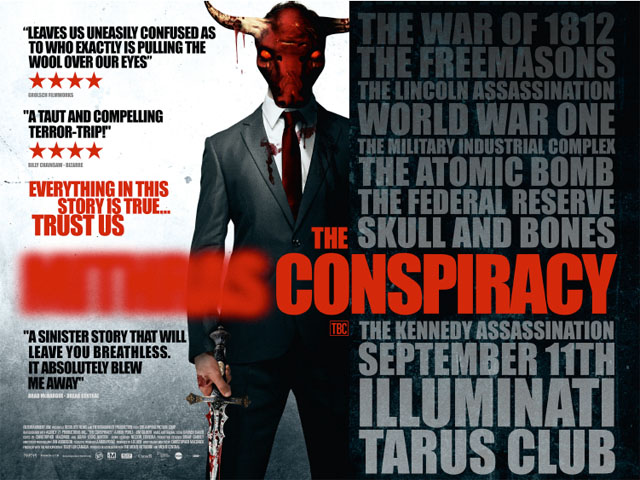 The two film-makers central to the film, Aaron and James and their person of interest Terrence appear to mirror the relationship that Director Christopher as the disappearance of Terrence mid movie leads Aaron down the rabbit hole of news clippings and read threads. At the end of this rabbit hole? A group known as the Tarsus Club who are connected to events such as 9/11 and World War 1. Aaron is believable in his descent into paranoia as he attempts to infiltrate the Tarsus Club. James, however, is far less interested in following Aaron as he has a child and a wife to worry about.

The acting of Aaron, James, Terrence and other experts who get interviewed throughout the film are believable. Pair this with the real footage from 9/11, political speeches, the Kennedy Assassination and Christopher’s attempt at a mock documentary becomes apparent.

Despite all its convincing, the nearer the end got the more macabre the climax got. The found footage style shows through more towards the end once Aaron enters a Tarsus Club meeting with a spy camera in his tie clip. unfortunately for Aaron, his presence is not appreciated by the members of the Tarsus club, more like a cult, who dress him up as the bull they worship.
There were a number of scenes that made me jump. An element of plausible paranoia was created that allowed the viewer to grasp an understanding of how enchanting conspiracies are. Nonetheless the ending was anti-climax, for me, and bordered on being a bit too predictable.

I will refrain from giving any spoilers and will stop discussing the plot. Should you choose to watch this yourself, it is best to watch with a mind that is a blank canvas rather than expecting – or knowing – of what is to come.

Personally, the ending left me with questions that were unanswered and that open ended-ness made me uncomfortable but maybe that is the point. Leaving the viewer with unanswered questions to open up the same rabbit hole that Terrence, Aaron and the director all fell down.

A question I do have that wasn’t answered after the film had ended. Why is there a blurred word in the title?!? Am I missing something. The ___ Conspiracy? But what…The what conspiracy? I’m guessing the missing word is related to the Tarsus Club who are the mysterious group that Terrence believes are controlling events of the word. If you know what the missing word is pleaseee let me know!

Christopher MacBride created a convincing faux documentary that even a conspiracy cynic could follow with plausibility. The Conspiracy would be perfect for a rainy afternoon on a day you had nothing better to do, or watch – come on, isn’t the quality of TV pretty poor at this point.

Comment your favorite conspiracies! New things to read and watch will be fab in aiding my procrasination from univeristy deadlines.

I’ll be back on Wednesday for another beauty post!